Mario Kart 8 Deluxe is the Nintendo Switch’s upgraded port of the stellar Mario Kart 8, DLC included. Unlike most ports to next generation consoles, this entry has some very significant updates, ranging from subtle to “Holy crap it has a real Battle Mode!” As such, this title should be treated as a new game, which is why we’re giving it a full review of its own. 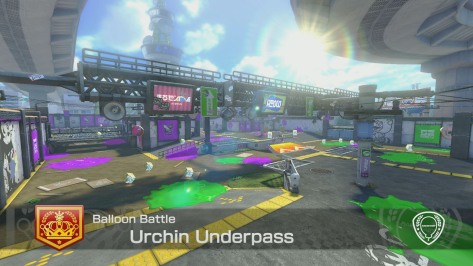 Mario Kart 8 for Wii U was a solid 9/10, with its only real, glaring flaws being its pathetic excuse for a Battle Mode, and the controversial “fire hopping” technique. We’re happy to report that both of those issues have been addressed. For starters, Battle mode has its own specific tracks now, 8 new tracks in total, a new Feather item that’s exclusive to battles, and five battle modes to choose from:

While the new and improved Battle Mode is a blast, the traditional racing mode saw several notable changes as well, beyond the fix of fire hopping. Most noticeable is the addition of a second item slot, allowing two items to be held at once. Double item boxes have been added as well, which helps improve the strategic aspect of Mario Kart 8 Deluxe over its predecessor: Double item boxes almost always have less than optimal placement, so players must weight the benefits of the second item against the faster route.

Splatoon’s Inklings (girl and boy, with three color variations each), Bowser Jr., Dry Bones, and King Boo all made it into the game as Deluxe exclusive characters. Speaking of Boos, the Boo item has now returned as well. There are tons of little touches and bonuses to go into, but we need to move on.

Visuals in Mario Kart 8 Deluxe are rendered at 1080p when docked, 720p when in handheld, and both modes look beautiful. The skipped frame glitch has been fixed, meaning the game will run at a perfect locked 60 fps in both modes. The multiplayer still locks at 30 fps when the screen is split for three and four player modes, but the two player split screen has been boosted up to 60 fps, so it’s a nice boost overall.

Mario Kart 8 Deluxe is a perfect game to sell the split joy-con multiplayer. The convenience of being able to detach the joy-cons and start a two player match of Mario Kart on the go, with literally no control sacrifice whatsoever, easily outweighs the fact they were not designed for adult male hands. Thankfully, the control layout took this into consideration and allows for the best possible distance between the stick and important face buttons.

Additionally, online has seen a pair of particularly nice changes, one via the game itself, and the other via the Nintendo Switch’s hardware design. Players can re-spec their karts in the online lobby between matches, which is a great quality of life change, and more obviously, the game is now portable. The Switch can be tethered to a smartphone to allow for online play wherever you go. We were initially skeptical at first, so we gave it a shot and it played like a dream, with no discernible issues or drops in an hour of use. It only used ~250MB/hour to boot, which is a reasonable amount of data to use for an hour of quality entertainment.

The biggest remaining issue with Mario Kart 8 Deluxe is that playing with friends has yet to be streamlined with a proper friend lobby. That may change with Nintendo’s future Switch compatible smartphone app, which they claimed would function as such, but it’s something that could have easily made it into the game itself.

[Edit: there was a typo in the article. I messed up when transcribing the score from my working document. X-Factor was always supposed to be an 8, not a 10. The overall score of 10/10 remains unaffected. Overall scores are rounded to the nearest whole number.]

6 thoughts on “Mario Kart 8 Deluxe Review: Racing to the top”