On the surface, the sight of “Make America Nazi-Free Again” offending some Americans should be a combination of frightening and disgusting. However, anyone with a passing knowledge of current events in America, and the integrity to dig past a thin fairy dusting of BS, can see why many, non-Nazi Americans would take great offense to the game’s slogan.

Clearly it’s a rip on Donald Trump’s “Make America Great Again!” I don’t think I need to point that out. What I do need to point out is the utterly disgusting tactic that America’s far Left has begun using to slander hundreds of millions of good, honest Americans: The Nazi Card. A flavor of the month variation of the Racist Card, anything the Left does not like, they label Nazi. Even Jews aren’t exempt from this treatment.

Ben Shapiro is probably the most relevant/famous Orthodox Jew in America today. He’s a straightforward man, follows his religion faithfully, and has targeted, and been targeted by, the Alt-Right’s Nazis more than any public figure in the past few years. Mr. Shapiro gives speeches around the country about justice, personal responsibility, individuality, the upside of capitalism, small government, and other concepts that are kryptonite to the Nazi brand of fascism. After all, anyone that knows jack about fascism knows its core tenets forsake justice and individuality in the name of putting the country and its pervasive, authoritarian government first.

Yet the Left sees this Jewish American  speak out against racism, and labels him a Nazi fascist, on top of making many attempts to silence him and those who like him. These attempts vary in degree of seriousness, but they’d all fit well in the Nazi playbook: Posting signs and graffiti about how he’s not welcome in their community, disrupting traffic, organizing acts of violence in the streets, destroying property, attacking people with bike locks, forcing businesses to close early, and what may be seen as conspiracy to commit murder against right wing Americans they lure into ambushes.

Antifa continues its transformation into Nazi-like fascists by the word’s very definition. They’re even trying to silence Jews now.

It’s not limited to Ben Shapiro either, water-brained Antifa sympathizers have also taken to slandering Charles Barkley, and really any black non-Democrat in America, as a “Black White Supremacist.” Though acts like this should surprise no one, as these idiots have led the charge for the Left, which now demonizes any citizen that is not a proud Democrat.

Don’t want to get caught up in this escalating flustercuck of increasingly fake news and desperate attacks coming from both sides of the media? Screw you stupid Boogie-wannabe centrists! You think Hillary Clinton was a bad candidate, just because she threw Bill Clinton’s sexual assault victims under the bus in front of the nation, undermined the democratic process in the 2016 primaries to beat Bernie Sanders, destroyed evidence crucial to a federal investigation in a Tom-Brady-blatant manner, may have willingly left Americans to die in a foreign country, and has been a notoriously bad liar since the 1990’s? You have a terrible case of Misogyny! You remotely agree with Republicans on any topic? I’LL SUCKER PUNCH YOU GODDAMN NAZIS!

And therein lies the problem.

Since the 2016 presidential election, the Left has been painting half of America as Nazis for the crime of disagreeing with them, then loudly proclaiming their intent to commit acts of street violence against all they feel meet their arbitrary criteria for being labeled Nazis. These Antifa-loving morons can’t even define fascism, nor can they identify Nazis for that matter, it’s just a word they apply to everyone they dislike. To top it all off, they brag about being Communists, the only non-religious, ideological group in history to be canonically worse than Nazis and all of the other fascists combined. 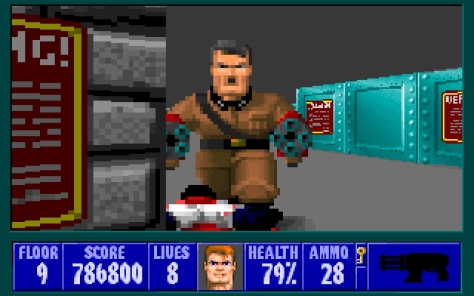 I sincerely doubt many gamers are complaining about the prospect of murdering actual Nazis to reclaim America from Germany’s second great f*%k up. (Remember, Marx came before Hitler chronologically.) It probably has more to do with the fact the new, highly politicized slogan plays into the relentless slander and potential physical violence many of them have had to endure from the Left.

Is there a Neo-Nazi presence in America? Yes, but it’s pathetically small. According to CNN’s report on the SPLC’s findings, there are more African-American hate groups in America (193) than Neo-Nazis (99) or White Nationalists (100). Blacks only make up 12% of America’s population and they have more hate groups than the Neo Nazis. If anything, it’s just another case of black people embarrassing Nazis at things they think they’re good at, and this time they didn’t even need Jesse Owens to upstage Hitler in his own capital.

Seriously though, it highlights how insignificantly small and unpopular the Neo-Nazis are as a group. The largest Neo-Nazi group in America, the National Socialist Movement, is 400 members strong and spread over 32 states. (You can search it yourself if you don’t want to take my numbers, I’m not linking to these shit stains’ websites.) That means there are between 400 and 39,600 Neo-Nazis in total in the US.

That may sound like a huge scary number on its own, but you have to consider the sheer size of America: That’s just 0.01% of America’s 323 million citizens. An ant beneath my shoe would offer more resistance than the entire American Neo-Nazi presence could. America can easily crush any Neo-Nazis that were to become violent. The current claims of rising Nazis in America are greatly inflated by jackasses that scream “Nazi! Racist! Misogynist! Bigot!” at anyone that disagrees with them, regardless of the words’ actual definitions.

Do I blame the people marketing Wolfenstein 2: The New Colossus for taking this low hanging fruit of controversy? Hell no! They’ve stumbled ass-backwards upon the literal greatest marketing push of the millennium, as current events have lined up perfectly with the well established Wolfenstein lore of “What if the Nazis won?” Wolfenstein 2: The New Colossus is going to be all over social media, gaming sites, and “real” news sites until its release.

Should they be afraid of chasing off too many potential customers? Not really. Wolfenstein 2: The New Colossus is the next installment of Wolfenstein’s “New Order Series,” which has reinvigorated the franchise and recaptured the spirit of the most important first person shooter of all time. I honestly doubt many among its traditional target audience will be turned off enough by the game’s politicization to actually skip it. After all, there are few things gamers love more than killing actual Nazis.

I do however, blame the media for the dishonest way in which it is presenting many non-Nazis’ frustration with the “Make America Nazi-Free Again” slogan. I hope we can all grow up a bit and someday reflect on this disgusting misrepresentation of an issue as one of the traditional media’s death throes.