On Amazon’s top 20 best seller list for video games, there are 10 games on the list. 8 of those games are made by Nintendo, the other two Sony. There are 5 Playstation store gift cards and 4 Playstation controllers. The only Xbox product on the list is an Xbox controller.

There are many variables to this number– the FCC hasn’t yet approved the Xbox One X for sale, so pre-orders cannot be made, and many games Sony and Microsoft announced either don’t have set release dates or aren’t available for pre-order.

Still, every Nintendo game on the list has been announced or shown off at E3. If the first two Sony products on the list– a $20 and a $10 gift card– are set aside (the cheapest game on the list is around $40, so those can’t be compared to full releases) the three top games are Super Mario Odyssey (#2), ARMS(#4), and Metroid: Samus Returns for the 3DS (#5). 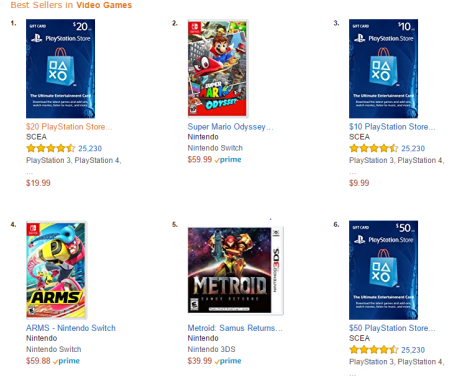 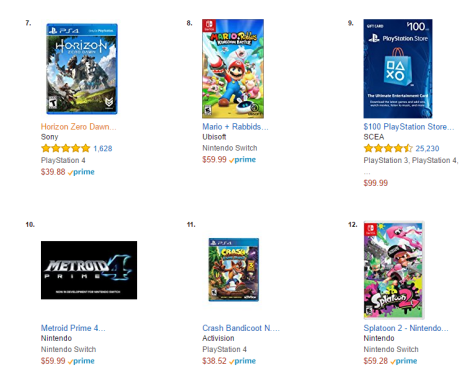 What’s important to note on the side of Nintendo is how much they’ve shown these games off the past few days. Mario x Rabbids was announced first at the Ubisoft conference (with a special appearance by Shigeru Miyamoto himself), then again in the Nintendo Spotlight. Splatoon 2 had it’s own tournament, with four teams from different parts of the world squaring off against one another for the trophy. Reggie Fils-Aime made a note to talk up Mario Kart’s impressive sales in an interview with Geoff Keighley. Like Splatoon, ARMS had it’s own tournament as well, has been shown on the Nintendo Treehouse and on the show floor, and Fils-Aime played it against Keighley in that same interview.

Most impressively, Metroid Prime 4 at #10 is insane, considering the only only thing shown has been a still image and will not be released for another year and a half.

To look at Nintendo’s success more specific to E3, Amazon’s “movers and shakers” list shows “our biggest gainers in sales rank over the past 24 hours.” The first 8 games on that list are all Nintendo (Metroid: Samus Returns, Metroid Prime 4, Mario and Luigi Superstar Saga, Yoshi for Nintendo Switch, Kirby for Nintendo Switch, Fire Emblem Warriors, Nyko Portable docking Kit for the Switch, and Rocket League for the Switch.

Now, none of these games had been ranked (none were announced) so it’s expected for them to take a big hike in sales rank if they starting from 0. Looking at games already out, Splatoon 2 saw a 108% increase in sales in the past day, Cave Story + for the Switch saw a 129% increase, and ARMS a 75% increase. The only Microsoft game currently out to see a big jump was Minecraft for Xbox One, and the only Sony to see a jump was GTA V.

The numbers don’t lie– whether it’s from games announced or games currently out, Nintendo’s E3 was a huge success. If this keeps up the Switch will be a real contender for Xbox and PlayStation.