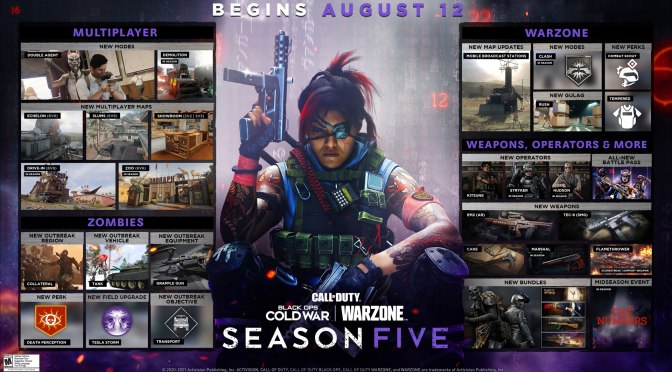 As we head into the end of Cold War’s life cycle, Season 5 is upon us, and includes a plethora of new content for the game, both Multiplayer and Zombies.

When does the new Season for Cold War begin?

The most important thing for us to know is when the new season actually begins, and as is tradition for Call of Duty lately, there is no downtime in between seasons, as Season 5 for Cold War begins on August 12th, 2021, at 9pm PT / 12am ET / 5am GMT.

The update itself for Cold War can be predownloaded at the same times two days before, on August 10th. The Warzone update will do the same method, being available for download on August 11th at the same times. These are on separate days to avoid straining the servers due to downloads.

Treyarch are coming out swinging in terms of new maps for multiplayer this season, with 3 being added at the launch of Season 5, and two being introduced later in the season. These maps are:

Long-time players of Call of Duty will recognize a few of these map names, with Slums making its return from its debut in Black Ops 2, and Drive-In and Zoo returning from the original Black Ops.

It wouldn’t be a new Season of Cold War without some new weapons for us to use, and thanks to the new roadmap Treyarch released, we know what these weapons are and when they release:

We have new modes coming with Season 5, as Double Agent launches, which Treyarch describe as: “an investigative Multiplayer party experience where each match assigns Double Agents who are there to sabotage the mission. Communicate, investigate, and expose the traitors – or successfully wipe out the investigating team – to win”.

Demolition is also coming mid-season, a classic spin on Search and Destroy, where players must defend or plant the bomb on two objectives to win the game.

Of course it wouldn’t be a Cold War Season with new content for Zombies, and even with the recent release of Mauer Der Toten, Treyarch are providing the mode with new content to keep things fresh.

A new perk, Death Perception. Originally in Black ops 4, this perk highlights enemies through walls and surfaces, and is returning in Cold War Zombies, but with 5 tiers of upgrades to make zombie players stronger the ever, including improved Salvage drop rates and the ability to see loot boxes through walls.

Tesla Storm, a brand-new Field Upgrade is being introduced. This Field Upgrade grants players the ability to shoot lightning at enemies, stunning and damaging them. As this is Cold War, it also has upgrades, which gives additional effects such as stunning special and elite enemies, and even boosting the speed of all players when active.

Last but not least, Treyarch isn’t forgetting about Outbreak. Collateral, the map introduced in Season 4, is being added as a region in Outbreak, as well as a new objective called Transport for players to undertake. New goodies are also included, such as a Grapple Gun to travel around faster, and even a tank as a new vehicle to take down the hordes with!

Typically a new season means a new battle pass, and Season 5 is no different. Expect 100 tiers of brand-new content, including blueprints, charms, and skins, including Kitsune, the new flagship operator coming with Season 5.

And of course, the store will receive many new bundles with this season, so if you see any that catch your eye, make sure to buy them if you want to do so.

Be sure to jump into Cold War Season 4 right now to complete the battle pass, or warm up your skills for the launch of Season 5 on August 12th.