Can anything South Park not be good? The Fractured But Whole was a small section of the Ubisoft Presser, only showing a 30 second teaser, but that and some gameplay released by Ubisoft shows a game with real promise. The trailer shows off a superhero friend group divided, and it’s up to the New Kid (the player) to unite the town.

While we didn’t get much from the trailer, Ubisoft put some gameplay up on their YouTube, which was recently moved over to GameRiot’s page. The 11 minute level walk-through shows the New Kid as sidekick to Captain Diabetes (Scott Malkinson), as the two sneak into a strip club (“The Peppermint Hippo”) to find information on cats that had recently gone missing.

During the play-through, the dev team pointed out that nearly every character was hand-animated, so every single interaction will feel unique to the player. Walking through the strip club, you can interact with the many characters in the room, from the strippers themselves, to the DJ, and Jimbo and Ned.

The two superheros need to get information, so they take two drunken clients into the VIP room to interrogate them…by giving them lap dances. This triggers a funny lap dance mini-game, which the player has to move the control stick and press buttons at certain times to complete. Most of New Kid’s powers are “fart-based” so you end up farting on the guy until he wants to fight you. 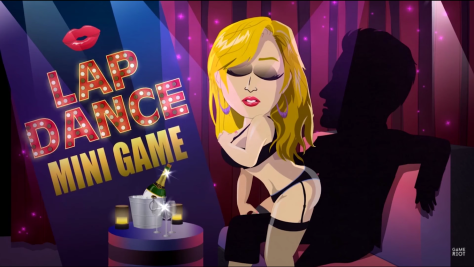 When the mini-game ends it starts the game’s combat mode, which features a cool turn-based style. The heroes use moves like “Faraday Uncaged” “Venus Dirt Trap” “Sugar Rush” and “Insulin Shock” to defeat their enemies. Some attacks have elemental effects, and players can combo with each other for special attacks, so combat should be fun and unique every time.

And the gameplay here: