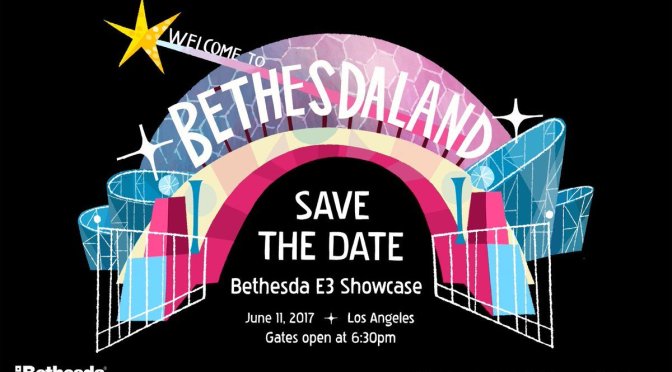 Bethesda brought out the B Team for E3 this year. The good: Bethesda has a wide and expansive library to still make an interesting conference. The bad: No new Elder Scrolls or Fallout. Sort of.

Bethesda placed itself at the forefront of VR gaming with two big announcements in Doom VFR and Fallout 4 VR. Having a large dev/pub like Bethesda enter the VR scene is a reassuring notion for owners of VR headsets, as it shows commitment to what may be the future of gaming, despite lagging hardware sales.

The Elder Scrolls: Morrowind should please fans of the series. More importantly, I thought Bethesda would avoid the YouTube and Twitch community videos. It’s a promotion tool that’s overdone, often fails to hit the mark, and takes away time that can be spent showing off the game.

The Creation Club may go down in E3 infamy. Twitch chat certainly thought so. The concept is cool– Developer and community modders come together for a serious modding platform that’s easy to use, safe, and reliable. It’s even going to be available on console. Unfortunately, they lost the audience when the words “spend credits” were said.

Essentially, The Creation Club is paid mods. Mods that you have to pay for go against the very foundation of modding. It seems like a way for Bethesda to make money selling things they don’t have to make, but also to strongarm other community modders: If the mod isn’t approved on The Creation Club maybe the game won’t support it, or maybe Bethesda will take action against the modder. It’s a cynical point of view, but very possible.

Elder Scrolls: Legends will appeal to fans of CCGs. With specific in-game story content they may be able to sell to more hardcore fans of the series, even if they’re not into the genre. It’s interesting to see Bethesda branch out into not only other devices (it will be available on iPhone and Android) but into different genres.

One of the more interesting reveals of the night: The Nintendo Switch Version of Skyrim. No one expected Bethesda to actually support motion control schemes, and there’s Amiibo support too. Nintendo Switch owners will have a lot of fun dungeon crawling and Fus-Ro-Dah-ing their way through the story of the Dragonborn. If players scan a Link Amiibo, they get to dress as the Breath of the Wild incarnation of the Hero, and wield the master sword! It looks like a really cool version of a classic game that could benefit from the convenience of the Nintendo Switch’s portability. One of the highlights of the conference.

Dishonored gets some love with Dishonored: Death of the Outsider. Play as Billy, a badass black woman with a crystalline eye as you hunt down the outsider himself. The trailer showed off classic Dishonored mechanics with a couple cool additions to weaponry. Fans of Dishonored 2 should be pleased with this standalone DLC.

Bethesda repeated a common trend of E3 this year by raising interest in their own esports scene with the Quake Champions World Championships. The teaser itself looked a little lackluster but the point is there: like Nintendo with Nintendo Versus and EA’s Madden, FIFA, and NBA tourneys, Bethesda is interested in competitive video games, and they’re looking to make Quake the game to do it. A cool $1,000,000 prize pool should pique gamers’ interests.

The Evil Within 2 was impressive visually, and looks to bring more action and psychological thrills than horror. Like many of the games featured, very little actual gameplay was shown. The Evil Within was a decent game, and I would’ve liked to see more of its elements fleshed out in the reveal. It seems they’re doubling down on it being a story-heavy game, and with Bethesda behind the wheel, I have no complaints. I’m excited for it. My one fear is that it won’t be as visually cool as the trailer made it look.

The big finale was Wolfenstein II: The New Colossus. The reveal trailer had a couple funny moments and showed off some kick-ass action. The gameplay itself looked passable, though not nearly as much shown as I would’ve liked. People went into this conference expecting big things, but as good as Wolfenstein is, it’s not really a big thing. It certainly looked cool, but Bethesda needed to show off a lot more to get people hyped for the game, especially since that’s what they decided to end with.

The trailer was very character and dialogue heavy, which isn’t a problem. The characters were funny and unique, the dialogue real and comical, but is that enough to get people to buy into a not-too-popular franchise? A trailer like that works for Fallout and Elder Scrolls because people are going to throw money at it no matter what. Will they do that with Wolfenstein? The trailer was certainly strong, but perhaps not strong enough to give Bethesda the big finale they may have been hoping for.

Final Thoughts: There were a lot of ups and downs here, a couple lackluster reveals paired with some genuinely exciting content. The conference itself only ran for 40 minutes, and the content shown felt like stuff that would usually be in the middle of a show, in between bigger reveals. Considering how big BE3 was two years ago, this looks weak in comparison. Bethesda is smart, though, in showing games they will release this year. That is an admirable tactic, and offsets the boring reveals. Good on Bethesda to keep release dates close. Creation Club leaves a big stain on an otherwise decent conference.

Pros: The games shown look promising, Bethesda’s interest in the esports scene and VR is reassuring for the future of gaming. Everything shown releases this year!

One thought on “E3 2017 Impressions: Bethesdaland”