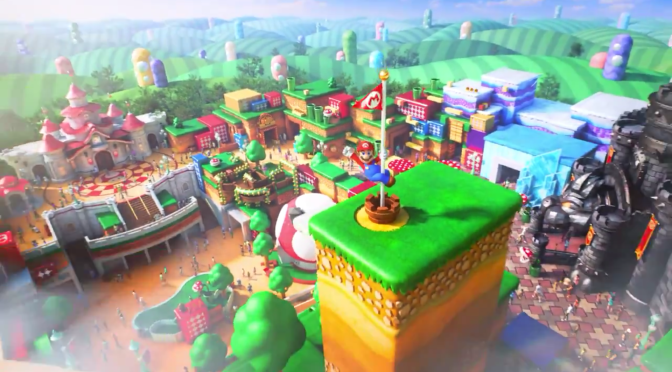 Universal Studios Japan has announced the start of construction on “Super Nintendo World.” This announcement was accompanied by a concept video. In the announcement, President of USJ said that the park “builds on the success we’ve had before” with other theme parks. The little described “Nintendo themed area” will have “different levels” and offers an immersive experience complete with attractions, restaurants, and shops.

Mark Woodbury, vice chairman of Universal Parks and Resorts, continued by announcing that a major part of Nintendo World will be the “Mario Kart Experience, an attraction unlike any the world has ever seen.” Woodbury promised it to be the most immersive and cutting-edge attraction possibly imagined.

“Here, Nintendo games will come to life,” said Shigeru Miyamoto, co-representative director of Nintendo. “Guests will… feel as if they are playing inside Nintendo video games.”

The concept video features Mario running through a pipe and ending up on the other side in the park, in front of Peach’s Castle. He greets a few customers as he runs around exploring, stopping in front of Bowser’s Castle where Piranha Plants snap at him. Classic rectangle-shaped hills and ledges stand in the background, which Mario then climbs and grabs the flagpole on top, revealing the park below him.

While little has been shown, from both the announcement and concept videos one can imagine “Super Nintendo World” will most likely be closer to “Super Mario World.” It is unlikely guests will see much of Hyrule or Corneria, but rather non-Mario universe characters and worlds will be used as gimmicks for restaurants or souvenirs. Although, the park was described as a “two-tier” structure with “multiple levels,” so no one really knows what to expect from Super Nintendo World just yet.

What do you think of Super Nintendo World? Are you excited by the news or are amusement parks not your thing? Sound off in the comments section below.