As the newest Nintendo console closes its 3rd month since release, fans still find themselves jumping at the chance to take home one of the elusive systems. Supply of the console has dwindled in recent weeks, with consumers in Japan lining up for blocks in an attempt to get their hands on the device.

Many businesses have moved to a lottery system to hand out the sparse few copies each store can get their hands on. With the supply as low as it is, scores of people are looking to luck out. While the release dates for mega-popular games Splatoon 2 and Monster Hunter XX are quickly approaching, there’s no sign that fans will be backing down either. 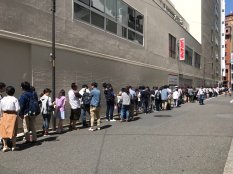 It seems that the problem is more than conspiracy theorists’ “artificial scarcity” issue: Other businesses, like Apple, seem to be using up the available parts that go into making the Nintendo Switch. The new console’s parts, such as the widely used NAND flash memory, produced by Toshiba Corp., are used largely in smart phones and tablets, putting Ninendo in direct competition with larger mega-corporations. Between the lack of parts, and sales wildly outrunning the original predictions, Nintendo just can’t keep up with demand.

Nintendo is attempting to double the original goal, and produce as many as 20 million Nintendo Switch units before March 2018, a feat that would put them well above the 14 million copies of the Wii U sold in the prior generation. Even so, if the shortage of available parts persists, these small batch sales and lotteries could continue for some time. Hopefully, Nintendo can get the parts they need by the holidays, or playing Mario Odyssey near the end of the year might be a bit more difficult than fans anticipated.

Do you already have a Switch, or are you still on the prowl? Let us know about your experience in the comments section below.