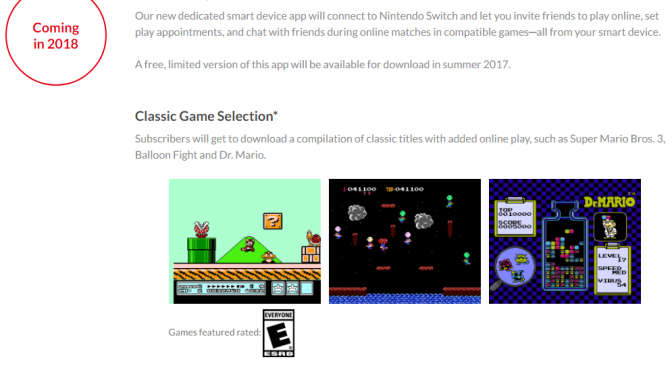 It’s been a while since Nintendo revealed the Switch would have an online subscription fee. While fans have not been pleased with this announcement, we all knew it was inevitable, as it’s the direction the entire console industry has gone. Fortunately, Nintendo has finally provided some details, and it looks to be way better than expected.

First for the bummer: Nintendo’s voice chat options are still absolute trash.  The only way to voice chat is through you phone, and this cool looking, licensed headset shows how Nintendo plans to get around that issue in the dumbest way possible. Additionally, voice chat is limited to friends. In other words, the voice chat app is a joke compared to everyone else.

Now that the negative is out of the way, let’s get to the positives.  The service is only $19.99 per year, and includes the smart device app that covers aforementioned voice chat and friend lobbies, online play, eShop discounts, and access to the tentatively titled Classic Game Selection.

That last one is a shocking change for the better. The Nintendo Switch will boast classic games that have been updated with online play. For example, the NES classic, Dr. Mario could be played with friends online as if it were couch competition. Previously, Nintendo intended to let customers play a specified game only for a month, before rotating the game out. It was not a very appealing service.

Now, the Classic Game Selection service acts like the PSN library, where customers have access to the ever increasing library for as long as they maintain their subscription. Currently, the only games confirmed for the service are Super Mario Bros. 3, Balloon Fight, and Dr. Mario, with more to be announced in the future. Eventually, SNES games may be added to the library as well.

Oh yes, the final surprise: While the Nintendo Switch  smart app will release his summer, the free trial period for online features has been extended to 2018.

One thought on “Nintendo Switch paid online detailed and delayed”