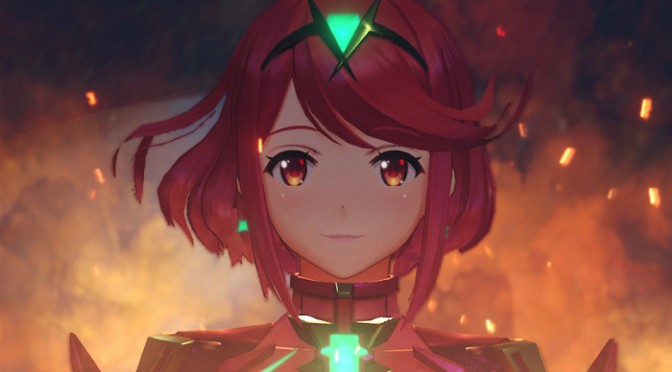 Xenoblade Chronicles 2 is on the way, and it has high hopes to live up to in terms of story and world building, but there’s one area in particular I want to focus on today: Combat. I have always lauded the greatness of Xenoblade’s combat, both in the original and Xenoblade Chronicles X, which has the best combat system to ever grace an RPG. It avoids the boredom inherent to the turn based combat systems of traditional JRPGs, and cuts down on the stiff, janky combat that saturates Action-RPGs. Combat in Xenoblade Chronicles X feels like the proper evolution of Final Fantasy XII’s Active Dimension Battle system, but it’s missing one vital piece that’s holding it back from perfection: Gambits. 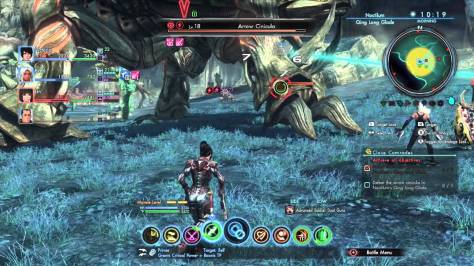 Combat in Xenoblade can be hectic and involve giant foes that require teamwork to overcome, something the Gambit system could improve.

Now that games with AI controlled party members are more common than ever, it’s easy to see that Final Fantasy XII’s Gambit system was too far ahead of its time for people to truly appreciate its greatness. Being able to customize party member actions to such a minute degree gives players the freedom to play how they want, and allows for a better experience all around. Seriously, how many times has a party member in a Xenoblade game yelled out “Wild Down!” and wasted their Topple inducing technique before Break/Stagger has been applied to the opponent? Too many times.

Xenoblade Chronicles X has 20 different party members, 95 passive skills, and well over 120 Battle Arts. Let’s not even go into the different weapon types, Skells, armor, and augments. However, because the player cannot control the party to the degree a Gambit system would offer, these abilities are almost never used to their full potential, or more importantly, to complement the player’s actions. To illustrate this, let’s look back at the Break/Stagger/Topple system.

In Xenoblade games, opponents can be toppled, dropping them to the ground and rendering them incapable of attacking or evading attacks. Once toppled, enemies can further be Dazed or Stunned, which extends Topple effects. These debuffs are an extremely important mechanic to master, and it requires teamwork to pull off: For the most part, opponents can only be reliably toppled after they are inflicted with Break/Stagger. If say Reyn were to use Wild Down before Break was applied, and he was currently the only member with a Topple Art, the player would have to wait 14-25 seconds, an eternity against formidable foes, before they could attempt to topple the enemy again. 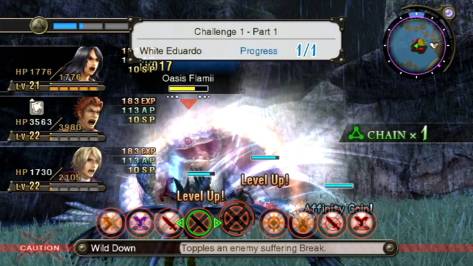 Players could take control of Reyn manually as well, but then Shulk would function like a drooling idiot in comparison.

A simple Gambit that requires Break to be active before Reyn will use Wild Down would solve this problem, and the ability to disable said Gambit against foes that are immune to Break/Topple would enable Wild Down to be used freely as a bonus to Reyn’s damage output against such foes. Programming that behavior into Reyn’s AI could also solve this problem, but that creates its own problems. Gambits can be altered on the fly to account for literally every situation, whereas immutable AI has to be pre-programmed for every contingency.

Imagine how ridiculous it would be to ask the developers to program AI that accounts for every Art the character can use, every enemy type encountered, every combination of available party members’ Arts, and the relevant status conditions of all parties involved in the encounter. It’s an unreasonable expectation to place on the programmers, and that’s before it even takes into consideration players’ unique play styles. We’re talking about Xenoblade Chronicles here, that’s not even considering the variables present in Xenoblade Chronicles X.

Xenoblade Chronicles 2 has a set main character that won’t have as much customization, putting solid narrative over freedom.

Assuming AI party members are returning, and combat stays at least as in depth as the original, there’s a definite need for the Gambit system, or its equivalent. Party members do not perform up to a competent player’s standard, but Gambits fix that by allowing the player to impress their will onto the members they aren’t directly controlling. The level of control afforded by Gambits also means enemy mechanics can become more complex, leading to more fulfilling combat, or at very least more thrilling endgame encounters.

Including the Gambit system in Xenoblade Chronicles 2 would make the best even better.