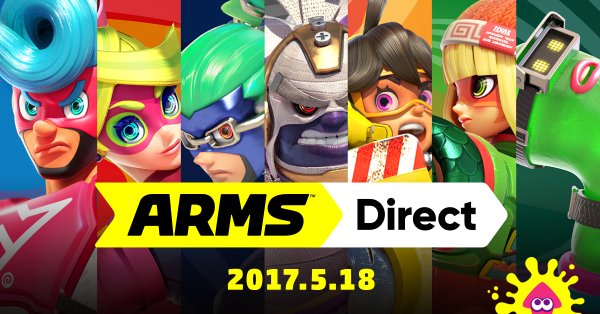 With less than a month until release, an ARMS Nintendo Direct has been announced for tomorrow. While there’s no word on how long it will last at the time of this writing, Nintendo has promised a “deep dive” into ARMS. Hopefully that means more new characters and talk about potential single-player content. This should be the last major information dump before the E3 2017 Nintendo Direct and ARMS Invitational Tournament.

The ARMS Nintendo Direct will also bring fans a new trailer for Splatoon 2. It’s nice that Nintendo is associating these two new franchises, and hopefully Splatoon’s success will rub off on ARMS. Both franchises are radically different from previous Nintendo endeavors, and feature their own distinctive art styles. Not to mention, they’re more fun with friends.

The ARMS Nintendo Direct will broadcast on May 17, at 3PM PT/6PM ET