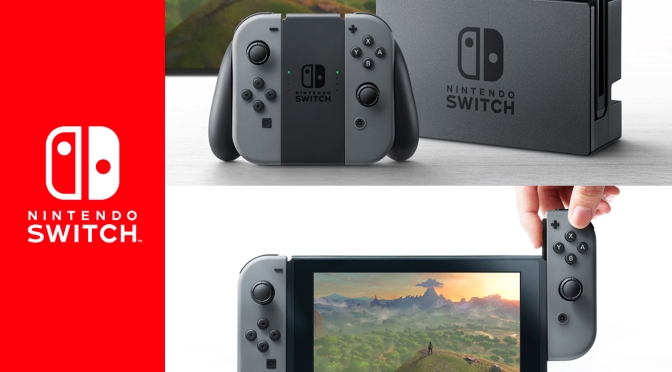 For over a year now Nintendo has been coquettishly teasing the gaming community with the promise of a new console. Only known until today by the codename “NX”, and now finally revealed to the gaming masses as the “Switch”. A hybrid mobile and common console as has been previously speculated over the last year.

Regardless of how one feels about the things Nintendo has done over the years, one thing you can never pin on them is a lack of innovation. Ever since the NES era Nintendo has devoted significant time and money towards creating new ways for gamers to experience their products. What started with R.O.B. the Robot has gone through many stages of greater or lesser import. From the popular NES Advantage to the Nintendo Wii, to the less popular U-force and best left unsaid Power Glove and Virtual Boy. So it’s no surprise that their new console attempt follows that same pattern of trying to bring something different to the table than all of the other game systems on the block.

At home the Switch will connect to your TV via what Nintendo is calling a “Switch Dock”. Allowing it to work on your computer as any standard console would. However when removed from the Dock the system instantly turns on its screen and becomes a handheld system that appears to be about the size of your average tablet. Controllers attached to either side of the tablet can be easily slid off to be used separately, together, or interchangeably to control the action in the game. Or can be passed to two separate players for multiplayer action. The small size allowing for multiple consoles in a single house to facilitate local co-op multiplayer with friends or family in the same home. Something from the days gone by of our childhoods that many games and systems have sadly been moving away from of late.

One confirmed thing of note that has been twittering around the rumour mill for the last half year or so is that this new system will indeed be cartridge based. A potentially smart move for Nintendo as optical media has begun to peter out more and more as a technology. SD cards and flash drives are no longer low capacity options. Being mostly more convenient and with much higher capacity limits than the discs we use now, and with potentially much faster loading times. For which all gamers everywhere will be eternally grateful.

But what we all really want to know about are the games. Let’s be honest here, everyone who buys this console will buy it or not based on the same traditional big name titles, Zelda, Mario, Mario Kart, Metroid, etc. This is what will make or break any Nintendo system, as shown with the Wii U launch.

So far the only headline games that we’ve seen is the new Legend of Zelda and a few tantalizing peaks at a new Mario game. While the Mario game has not really shown it’s full hand yet, the new Legend of Zelda looks good enough to justify the console on it’s own. There are even voices saying that with this new system the Legend of Zelda will FINALLY go open world. Something Zelda fans have been begging to have happen for the better part of a decade. Other games shown briefly were Mario Kart, Splatoon, Some NBA game, but really it was all about the Zelda this time around. Hopefully Nintendo will take the time to give us some more detailed information on exactly the kind of launch line-up that we can expect next year when the console hits the shelves.

According to Nintendo, the Switch was designed with the idea in mind of ultimately making it possible for the player to game in any possible way or configuration they might desire. But, perhaps more importantly, to also allow developers to build games for the system which support almost any play style. This is a step in the right direction for Nintendo, as they have had problems in the past by restricting developers to their own gimmicks leading to what was a major problem for third party development for their last two consoles.

Nintendo has apparently learned from their past, rather abusive, relationships they have had with third party developers. This is reflected by a long list of designers and developers that are lining up to support the new system. Including names such as Bethesda (which has already developed a version of Skyrim for the systems coming out), Nippon Ichi, Square Enix, Sega, Ubisoft, Warner Bros. Interactive, and EA among almost two dozen others. If all of these developers truly step up to the plate and bring along their A-game to development it could mean that this time next year Nintendo will be set up to dominate the market as it did once in the past.

2 thoughts on “Nintendo Switches It Up With New Console”