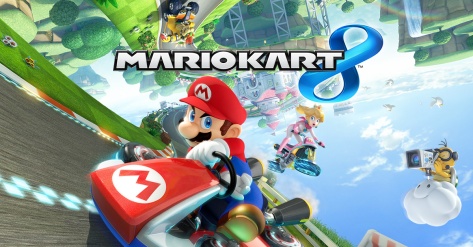 Mario Kart 8 has been out for a while now. I’m sure you’ve read reviews from around the time of release, it’s possible readers may have even talked about it in the forums of their choice, and I’m sure anyone who follows video games has already heard of the “Luigi Death Stare” that became a popular gif to flood forums with, but now that the hype train has left the station, can we take a clear look at what at the time was being hailed as Nintendo’s savior?

IT CERTAINLY LOOKS AND SOUNDS NICE.

For being on a system that catches so much flack from its detractors for being underpowered, Mario Kart 8 is arguably the best looking console game on the market today. It runs at a native 720p and 60fps and is pretty amazing considering it’s one of Nintendo’s early forays into completely HD games.

Mario Kart 8 was my first day one purchase in a good while, and its level of detail and fluidity still impresses me today. It certainly isn’t perfect and could have done with some AA, but Nintendo’s distinctive, colorful art style helps make up for the lower resolution, which would undoubtedly detract more from a game going for gritty realism, together with the almost silky smooth 60fps and the attention to small details in the karts themselves, makes it the games just downright pretty to look at.

The soundtrack is also amazing. Live recorded music with that upbeat, jazzy feel that sticks with you even after you’re done racing. It was a great move on Nintendo’s part. It’s full of happy tunes you can hum along to as you destroy friendships via couch co-op or online.

Nothing is more fitting than the Luigi Death Stare to sum up how much fun I get from Mario Kart 8.

Mario Kart 8 multiplayer is just good clean fun. Okay, so it’s only as clean as you and your friends’ mouths are. I can see why Nintendo wouldn’t want voice chat during races: Mario Kart 8 continues the tradition of making even the most mild-mannered of friends into hyper competitive jerks, in a good way. Nothing is as sweet as the string of expletives or sounds of disbelief that follow that perfect shot with the green shell at the finish line.

Mario Kart 8 should be marketed as a time travel device because I swear looking at the screen for a moment causes time to lurch forward three hours. Thankfully the gamepad has a terrible battery life or I would never get anything done.

IT’S NOT QUITE PERFECT.

The only thing more satisfying than outracing your friends is pounding them into submission with kart combat…at least it would be more satisfying if battles took place in a proper arena. Where are the battle arenas? All of the battles take place on the standard race tracks. This is the most glaring flaw in the entire game and the mind reels at what Nintendo was thinking to not have this in the game from the beginning. Imagine how inventive these arenas could have been in the age of anti-grav karts. The only thing that I’m thankful for is that we live in an age where a game isn’t set in stone after you purchase it and take it home. Hopefully there will be future DLC, that the optimist in me hopes is free but the realist knows won’t be, because battle arenas are too big a part of Mario Kart to just leave out.

The only other nitpicks I have are that the item distribution isn’t the most balanced and the map doesn’t show you what items your opponents have. It can be a pain, but it’s something you get a feel for and try to work around. Skilled players will still win the majority of their races regardless, but it is disheartening to continuously receive coins in fourth while the racer in second receives triple red shells.

MARIO KART 8 IS A TURNING POINT FOR THE WII U.

Mario Kart 8 wasn’t the Wii U’s savior, but it may be the herald of an amazing turnaround for the Wii U. Sales are up, though almost certainly not as much as everyone at Nintendo was hoping, and the future is bright after an impressive showing at E3.

What does this have to do with Mario Kart 8 in particular? It could mean Mario Kart 8 gets a lot of support through DLC and the unfortunately named amiibos. It’s a strong title in a relatively thin 2014 lineup that could benefit greatly in longevity through these two additions. Racing custom characters from friends’ amiibo race data and finally getting the battle arenas that players crave could be a shot in the arm to Mario Kart 8’s sales around the holiday season, or sooner, and give everyone with the game something to look forward to.

Refreshingly enough, Mario Kart 8 was one of the few games that lived up to the hype around its release. Unlike titles such as Titanfall and Watch_Dogs, which didn’t quite live up to expectations players had built around them, Mario Kart 8 went beyond my expectations, even with the battle arena failure.

As if Mario Kart 8 alone wasn’t worth the purchase itself, it comes with a free game of your choice from a preselected list. These aren’t low quality throwaway games either. North Americans can choose between Windwaker HD, Pikmin 3, New Super Mario Bros. U, and the lesser Wii Party U (Okay so 3 out of 4 aren’t throwaway titles). However, this deal only lasts until July 31.

The Wii U has suffered through poor sales till now, but don’t let that fool you. The existing library of Wii U games is impressive and well received. Overall the Wii U has the best lineup of this generation, according to Metacritic if critic or user reviews are your thing.

So if you don’t own a Wii U yet and want to play Mario Kart 8, but are worried about if the Wii U is worth the purchase, I can tell you it is. Thanks to Mario Kart 8, I play the thing more than my gaming computer.

3 thoughts on “After the Hype: Mario Kart 8”